The New England Patriots have their eyes on a sixth Super Bowl ring after beating the Kansas City Chiefs in a thrilling AFC Championship game on Sunday. If quarterback Tom Brady and the favored Pats prevail against the powerful Los Angeles Rams at Super Bowl LIII in Atlanta on February 3, you can bet the 41-year-old captain and his teammates will be rewarded with the biggest and blingiest championship rings ever created.

The National Football League maintains an unwritten rule that allows the teams with multiple Super Bowl victories to design the most extravagant rings. Two years ago, when the Patriots captured their fifth Vince Lombardi trophy with a wild come-from-behind victory over the Atlanta Falcons, the team was rewarded with massive rings gleaming with 283 diamonds weighing a total of 5.1 carats.

At the time, team owner Robert Kraft said, “It was a historic comeback win and the players deserve to have a ring that represents that accomplishment. So, we created the biggest Super Bowl ring ever made.”

The Pats had a chance to win their sixth Lombardi Trophy in 2018, but were thwarted by the Philadelphia Eagles 41-33 in Super Bowl LII. Even so, the Patriots' 2017 Super Bowl LI rings continue to set the high-water mark for championship rings.

Jostens documented the relative size of the Patriots’ Super Bowl rings in the amazing photo, above. If the Pats win another Super Bowl, we'll be excited to see how Jostens and the Patriots will manage to design a ring bigger than the 2017 installment.

On the other hand, if the LA Rams take the Vince Lombardi Trophy, it will be only their second championship in four Super Bowl appearances. The rings will likely have a modest design, with less gold and fewer precious stones.

If the Patriots win Super Bowl LIII, they will tie the Pittsburgh Steelers for the most Super Bowl victories at six. The Dallas Cowboys and the San Francisco 49ers each have won five. 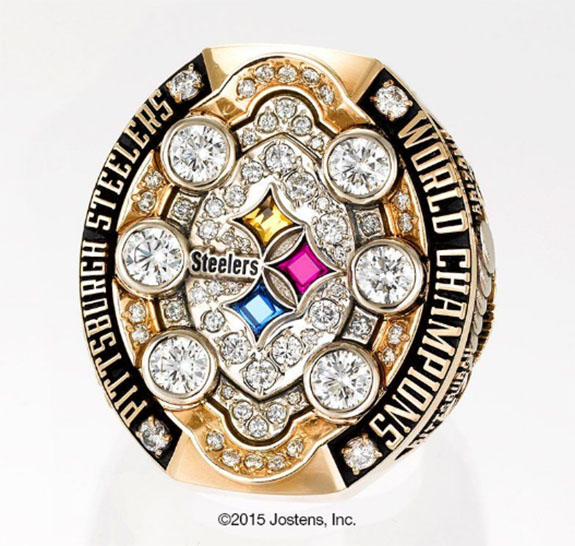 One would think that, since the Steelers have the most Super Bowl victories, the rings commemorating the sixth championship should rank as the largest ever. Well, they're not. When the Steelers won their sixth Vince Lombardi Trophy in 2009, the championship rings featured 63 diamonds weighing 3.61 carats. Although this was the biggest of the six Steelers rings, it was still far smaller than the one awarded by the Patriots in 2017.

The NFL typically awards 150 rings to the Super Bowl victor and allocates approximately $7,000 per ring — although teams with multiple Super Bowl victories are allotted a higher budget for diamonds. Teams often create “B” and “C” level rings — designs with faux diamonds or fewer diamonds — for distribution to the front office staff. The rings are usually presented to the players some time in June.

Traditionally, the value of the Patriots’ rings have far exceeded the norm. In 2015, Business Insider reported that the Patriots’ 2015 Super Bowl XLIX rings were budgeted at $36,500 apiece.